A Festival Of Colours. Happy Holi !

Spring has most definitely sprung !

It’s lovely to witness the little ones venturing outside into the sunshine without their winter woolies, the emerging of a kaleidoscope of fresh colours across the landscape and have you heard the dawn chorus recently? all signs marking the seasonal change.

With the passing of the March equinox on the 20th March, the mid-way point where the daylight hours are increasing, there were many a spring celebration taking place. This particular one recently though caught my eye and has to be on my bucket list.

A festival of colours, otherwise known as Holi, the celebration which has its roots in Hinduism in India.

An orchestra of love, laughter and colours are being celebrated and it’s catching on in many other parts of the world too and I can see why.Dubai  England, Germany, Mexico,the Caribbean & America to name a few.Currently Spanish folk in Utah  has the largest celebration of the festival in the west. 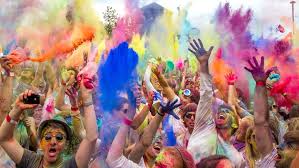 A picture of happiness

At the approach of the equinox, when the moon is full, gatherings take place where bonfires are lit to commence the start of  the  #colour festival.Varying stories are told that have passed from generation to generation and folk songs are sung with accompanying music.During this time people gather to celebrate not just the arrival of spring but a time when people are supposed to be equal, forget and forgive, a time for making new friends, wishing for a good season and commemorating the good harvests of the past. Seen to many as the start of the new year.

The next day is a complete free for all, people of all races, ages, backgrounds and creeds, chase each other, playfully painting, splashing and spraying one another with coloured powder,dancing and singing – sounds like great childhood fun to me !

Powder for sale in the markets

Traditionally the coloured powder is made from natural herbs, spices and plants.Roots like beetroot for red, turmeric is the typical spice for yellow and sources of blue include jacaranda flowers. A rainbow of colours as I’m sure you know, can be mixed from these three primary colours alone.

I think the rainbow song I wrote encompasses the mood of the celebration and is perfect for the children to sing at these festivals of colour.

Anyone and everyone is a human canvas and will get totally covered in powdered paint & water. Giant water fights with coloured water filled balloons abound in the streets,parks,even outside temples.  It is believed that the combination of different colours take all the sorrow away and make life itself more colourful. “What a fantastic belief”!

In some parts of the world celebrations go on for days or even weeks. Worldwide organized events are contagious too, which can only be a good thing for uniting different cultures around the world. I’m looking forward to the day when I can experience the celebrations with all of my senses as authentically as possible “I guess I had better go shopping for a sari now I have a good reason,well… some are just gorgeous aren’t they?”.

Whilst those of us in the northern hemisphere are enjoying all of natures delights and longer warmer days, it’s quite another story for those living in the southern hemisphere who are experiencing the change leading into winter. Ah but …what goes around, comes around.